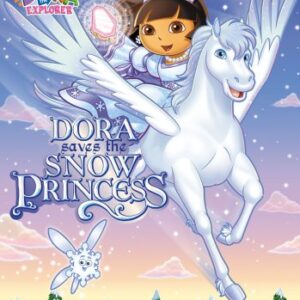 Amazon.com
Join Dora the Explorer as she sets off on her first adventure on the Wii gaming console. In Dora the Explorer: Dora Saves the Snow Princess, a mean witch has put a spell on the Magic Snowy Forest and now it is starting to melt. If it isn't stopped, it will melt away to nothing. With help from new friends like the Snow Fairy and everybody's favorites Boots, Swiper and Pirate Piggy, your child embarks along with Dora, on an adventure to find the magic crystal that will return nature's balance, free the Snow Princess and save the beauty of winter from disappearing forever.

Ease of Play and a Parental Multiplayer
A simple, easy to pick up and play, platform-based game aimed at pre-school children age 2-5, Dora Saves the Snow Princess makes good use of the intuitive Wii Remote. Within minutes your child will be building snowmen, ice skating, snowboarding, riding Pegasus, as well as enjoying a slew of other winter-themed activities. And with the game's 'Snowy Forest Helper' feature, parents can join in the fun as their child learns the importance of helping those in need and the value of friends. Screenshots: