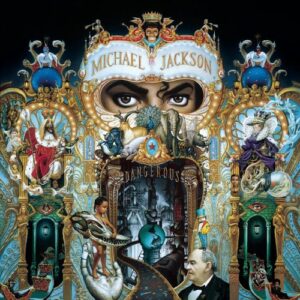 Product Description
MJ's 1991 blockbuster was the fastest seller of his career on the back of hits like Black or White; Remember the Time; In the Closet; Heal the World and Who Is It . This reissue enhances the original package with a 24-page booklet featuring previously unseen photos.

Amazon.com
Michael Jackson was still going for pop hits with 1991's Dangerous, but he also front-loaded the album with six straight Teddy Riley-assisted cuts. This half-hour swoop of tense, aggressive, often angular funk was Jackson's most interesting music since Thriller, and still sounds, well, invincible on this remastered edition. After that, the record's uneven, but there's nothing embarrassing about it, either. "Gone Too Soon," a non-Jackson composition about teen AIDS casualty Ryan White, is a quiet statement (particularly played next to the choir-laden "Heal the World," "Keep the Faith," and "Will You Be There") showing that the star doesn't always have to get showy. The sprightly "Black or White" is explicitly pro-interracial romance, an angle its video didn't go near, and the urgent "Give In to Me" is almost scary. Scary good, that is. --Rickey Wright

Be the first to review “Dangerous” Cancel reply