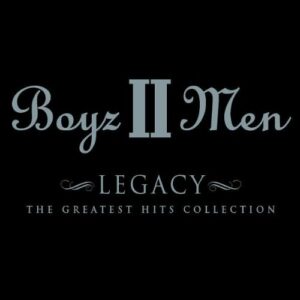 Product Description
All the biggest hits by this wildly successful Philadelphia R&B vocal quartet-the best-selling artists in the history of Motown Records! Includes their #1 pop smashes One Sweet Day (with Mariah Carey); I'll Make Love to You; End of the Road , and On Bended Knee ; their Top 10 hits Water Runs Dry; It's So Hard to Say Goodbye to Yesterday; Motownphilly; In the Still of the Nite (I'll Remember) , and five more!

Amazon.com
Legacy is the right title for this album. Boyz II Men were the original, modern-day boy band, predating both 'N Sync and the Backstreet Boys. Heavily influenced by doo-wop groups such as the Platters and the Dells and developed by ex-New Edition member Michael Bivins, Boyz II Men quickly rose to heavyweight status after the foursome's 1991 debut, Cooleyhighharmony, their success based on romantic ballads and strong vocals. However, they lacked the charisma and looks to really make an impact on the world, and they're perhaps the only group that could be described as "quietly" selling 35 million records. This collection of their best moments concentrates on their strengths as crooning Cupids, exemplified by their massive hit and classic ballad "End of the Road" (taken from the Boomerang soundtrack). "Hey Lover," featuring LL Cool J, is as energetic as the album gets. Legacy is unabashedly assembled for lovers of slow, romantic bedroom soul. --Jake Barnes