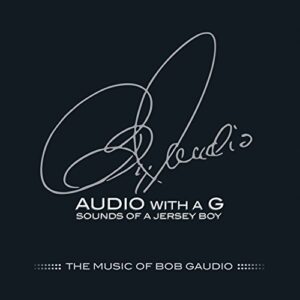 Audio With A G: Sounds of A Jersey Boy, The Music of Bob Gaudio (2CD)

Audio With A G: Sounds of A Jersey Boy, The Music of Bob Gaudio is a two-disc compilation that pays tribute to many of the memorable songs that Gaudio wrote through the years. It begins with "Short Shorts," a 1958 hit that he co-wrote when he was 15 and a member of the Royal Teens. Many songs feature Frankie Valli & The Four Seasons, but there is no shortage of other artists who have performed Gaudio s songs, including Frank Sinatra, the Tremeloes, The Walker Brother, Diana Ross, Nina Simone, Cher and the Temptations. All three of these collections arrived soon after the debut of director Clint Eastwood s big-screen version of the Tony Award-winning musical Jersey Boys. To celebrate the film, Rhino will also release the soundtrack to this highly anticipated film.

Be the first to review “Audio With A G: Sounds of A Jersey Boy, The Music of Bob Gaudio (2CD)” Cancel reply