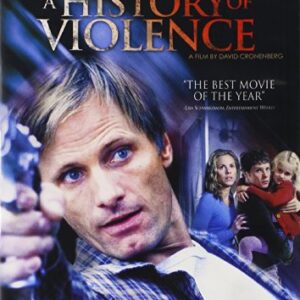 Product Description
An average family is thrust into the spotlight after the father (Viggo Mortensen) commits a seemingly self-defense murder at his diner.

Amazon.com
On the surface, David Cronenberg may seem an unlikely candidate to direct A History of Violence, but dig deeper and you'll see that he's the right man for the job. As an intellectual seeker of meaning and an avowed believer in Darwinian survival of the fittest, Cronenberg knows that the story of mild-mannered small-town diner proprietor Tom Stall (Viggo Mortensen) is in fact a multilayered examination of inbred human behavior, beginning when Tom's skillful killing of two would-be robbers draws unwanted attention to his idyllic family life in rural Indiana. He's got a loving wife (Maria Bello) and young daughter (Heidi Hayes) who are about to learn things about Tom they hadn't suspected, and a teenage son (Ashton Holmes) who has inherited his father's most prominent survival trait, manifesting itself in ways he never expected. By the time Tom has come into contact with a scarred villain (Ed Harris) and connections that lead him to a half-crazy kingpin (William Hurt, in a spectacular cameo), Cronenberg has plumbed the dark depths of human nature so skillfully that A History of Violence stands well above the graphic novel that inspired it (indeed, Cronenberg was unaware of the source material behind Josh Olson's chilling adaptation). With hard-hitting violence that's as sudden as it is graphically authentic, this is A History of Violence that's worthy of serious study and widespread acclaim. --Jeff Shannon

On the DVD
On a single disc and with little fanfare, this DVD makes an excellent case for the best extras of the year. Dive into the one-hour-long documentary and learn more about moviemaking than on many a double-disc. The secret lies in director David Cronenberg's (and his usual crew) folksy casualness in showing off the craft, be it makeup (green screens were used), directing (Cronenberg doesn't storyboard), or art direction (the diner set). It also is very funny to hear about "fish Fridays" and how Maria Bello's Uncle Pete became an influence. Even the infamous sex-on-the-staircase scene is diagnosed with candor as stars Viggo Mortensen and Bello act as if there is no backstage camera. There's only one deleted scene, but it's uncommonly deconstructed on why it was filmed and why it was cut (it's a very Cronenbergian dream sequence). A short bit on Cannes is also a delight. So much is here that Cronenberg's smart commentary track is nearly superfluous. Isn't that a nice surprise? --Doug Thomas

Stills from A History of Violence

Bounty Hunter: Stops Along the Road